Timothy's Story (or How I Became a Dad)

November 02, 2016
When Jess and I were engaged, we had several discussions about how many kids we wanted. Ultimately, we settled on at least three, and at most twelve. Really, we just wanted to have as many kids as God would send us.

After we got married, we started trying to get pregnant right away. But month after month, we were unsuccessful. Jess had been told previously by a doctor that she probably had endometriosis, and might have trouble getting pregnant. So she asked her OB at the time about it. But everyone she talked to said that we would have to try for about 2 years - or 1 year at the very least - before they would even start investigating any possible causes of infertility. Meanwhile, the endometriosis was also causing Jess to have very painful periods once a month, but her doctors refused to look into it.

Some of you might have noticed that when you're trying to get pregnant, and aren't pregnant yet, you will start seeing babies and baby bumps everywhere. It seemed like everyone else was succeeding where we were failing. And while we were happy for all of our friends, we were also heartbroken.

Fortunately, since we were using the Creighton model of Natural Family Planning (NFP) we were connected to a group of doctors who specialized in something called NaPro technology. They were willing to take a closer look into why we hadn't conceived yet.

Long story short, after some blood tests, hormone checks, and a laparoscopic surgery, they found and fixed the problem (sure enough, endometriosis was the issue). A few months later, we were able to conceive; we were pregnant!

Fast forward nine months. Everything about the pregnancy had gone swimmingly. (I'm sure there's a joke in there about babies swimming in their mother's wombs. Feel free to make that joke yourself and laugh. We'll call it crowd-sourced comedy.) But during labor, an alarm on the fetal heart rate monitor sounded. Our baby's heart rate had dropped dramatically.

There was a rush of activity, and our hospital room was flooded with nurses and doctors. They were preparing for a C-section, but then baby's heart rate went back to normal. This happened countless more times over the course of the next nine hours. It was a terrifying labor experience, but finally, a beautiful baby boy emerged. We named him Timothy James. If we thought the trauma was over, though, we were mistaken. A nurse rushed Timmy off to the side so that they could check his breathing, movement, etc. There was something wrong with his breathing, so they had to take him to the Special Care Nursery.

Jess and I sat in the hospital room for a while, without our son, until I was finally summoned to the Nursery. (Jess was still recovering from her epidural and, you know, labor, so she had to wait in the hospital room.) A nurse escorted me into the Nursery, and took me to my son. It was wonderful to see my baby boy, but sad to see all the tubes and wires hooked up to his tiny body.


He ended up having to stay in the Nursery for 10 days so they could administer antibiotics. Jess spent most of her time in the Nursery each day. I went back to work a few days after Timmy was born, but I went straight from work to the hospital at the end of each work day. I spent my time with him holding and reading him J.R.R. Tolkien's The Hobbit. Obviously he had no idea what was happening in the story, but I wanted him to hear my voice. I even sang the songs to him. The Lonely Mountain Song ("Far over the Misty Mountains cold...") ended up becoming a surefire way to calm him down for a year or so, and it is now the song I sing him before bed.

Finally, we were able to bring Timmy home from the hospital, but even that didn't last long. Only four days later, we had to take him into the ER, for what ended up being liver and gallbladder problems. We spent most of a Friday night in an ER, waiting for an ambulance to come transport him to the children's hospital in downtown Chicago.


They did some tests, and found that there were enzymes in his liver that were elevated above normal levels. Over the next few days, though, those levels began to normalize. On Monday, they gave him a clean bill of health, and we brought him home - 17 days after he was born. After all those hospital trips, all the worry and stress, he was finally home. We never really got answers on what had caused either of the hospital stays, but he's been perfectly healthy since then (besides the usual colds and ear infections).


There are a bunch of details I left out of this story, to try to keep it on the shorter side. I go into a lot more of those details in the book I'm writing, which will be about all four of our pregnancies.

Just a Catholic Dad Podcast is "a podcast about faith, family, and fatherhood." The host, Sean McCarney, is a Catholic with a non-religious wife, and an adorable daughter named Caitlin. He talks about the joys and struggles of bringing up his daughter in the faith. He's an air traffic controller, so he has an irregular schedule, which brings its own set of struggles into the mix.

Oh, and did I mention he's from the UK? So he and his daughter (who makes occasional "appearances" on the podcast) have awesome accents. Well, Sean's accent is awesome. Caitlin's is adorable!

He also weighs in on the current events in the Church and the world. Hearing his take on the Brexit/Bremain debate was fascinating, since he actually focused on what was good for the UK, as opposed to how it would affect the United States.

And one of my favorite segments is called "Holy Homework." Each show, he'll ask a question about the Catholic faith (something like, "What are the three evangelical counsels?"), and invite the listeners to send in their answers via email. It really encourages people to learn more about Catholicism. And even if you don't have time to look up the answer, at least you'll learn something new when Sean reveals the answer on the next episode.

Sean is very engaged with the listeners, and reads just about every email he receives from them on the show. He offered prayers and condolences to me when I told him about our two losses, and he has asked the rest of the listeners to pray for me as well.

Even though we've never met in person, I consider Sean a good friend. I highly recommend his show. You can find more information about the show at Sean's website, justacatholicdad.com.

Thanks for reading! If you like my blog, and you'd like to receive emails each time I upload a new post, you can enter your email address below. If you want to express an opinion, ask a question, or give feedback about this post or others, feel free to leave a comment below, or email me at geekycatholicdad@gmail.com.
book fatherhood GCD Pick Just a Catholic Dad NFP Timothy

Happy Feast Day. I wish you were here to celebrate with us.

Sometimes, when I visit your grave, I try talking to you. But it's always been a bit weird. Maybe it's because your grave isn't really where you are. Somehow, writing a letter feels more natural to me.

What Did We Just See?!? My thoughts on the Star Wars Episode IX Trailer 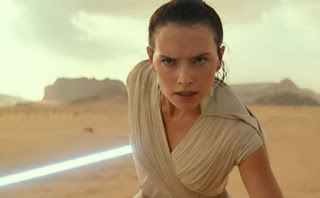 Thousands of Star Wars fans are gathered in Chicago right now for Star Wars: Celebration (which is a massive Star Wars convention, for those who might not know). They were just treated to an hour-long panel with J.J. Abrams, Kathleen Kennedy, and the cast of Episode IX, moderated by Stephen Colbert. The panel was streamed live online, and will probably be available to watch on YouTube soon, if not already. At the very end, everyone left the stage and they aired the very first teaser trailer for Star Wars: Episode IX.

Here's a link to the trailer, if you haven't seen it yet: https://youtu.be/adzYW5DZoWs

Below is my breakdown. For the purposes of this summary, anything in all-caps represents the text displayed during the trailer. Italics is voice-over, and plain text is descriptions of the visuals with my interpretation.

The Trailer
We start with a black screen.

Rey: [breathing, as if she had just been running.]

The shot opens up looking at Rey, standing in a desert. Is it Jakku …
Read more 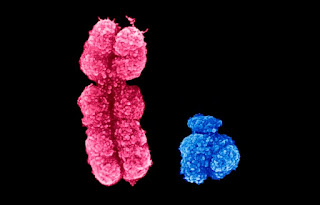 Every once in a while, I'll hear something in a homily or on Catholic radio that sparks a question. As I'm not an authority on Catholic theology, but I'd like to explore these topics a bit, so I've created the series "Geeky Catholic Questions." Today's question: Where did Jesus get his Y chromosome?