Hope: Looking Up vs. Trust 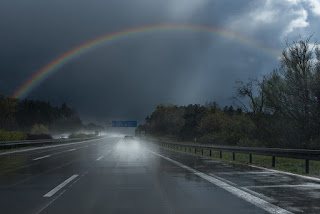 Several months ago, my sister-in-law and her husband lost a daughter to miscarriage. When I heard the name they gave to their daughter - Maria Esperanza - I was inspired to write about the virtue of hope ("esperanza" is Spanish for "hope"). I have been struggling since then to put this post together. There are so many questions to answer. What does it mean to hope? How can you have hope in God when it seems like He only sends you suffering? Does a miscarriage prove that your hope was in vain?

But after months of putting it off, I've finally put pen to paper (finger to keyboard? electrical impulse to web server?). I'd like to dedicate this post to Maria Esperanza and her parents.

The Wisdom of the Noldor
Usually, my faith influences the way I view books, movies, TV shows, comics, etc. Occasionally, though, I'll read or see something in the world of fiction that prompts me to reevaluate how I live my faith. One such example is The Athrabeth - a passage written as part of J.R.R. Tolkien's work on the Silmarillion - which offers an explanation of the theological virtue of hope.


'Have ye then no hope?' said Finrod.

'What is hope?' [Andreth] said. 'An expectation of good, which though uncertain has some foundation in what is known? Then we have none.'

'That is one thing that Men call "hope",' said Finrod. 'Amdir we call it, "looking up". But there is another which is founded deeper. Estel we call it, that is "trust". It is not defeated by the ways of the world, for it does not come from experience, but from our nature and first being. If we are indeed the Eruhin, the Children of the One, then He will not suffer himself to be deprived of His own, not by any Enemy, not even by ourselves. This is the last foundation of Estel, which we keep even when we contemplate the End: of all His designs the issue must be for His Children's joy. Amdir you have not, you say. Does no Estel at all abide?'

Let's unpack that a little bit. Amdir is the expectation that good things will happen, based on past experiences. Estel is a trust in God, based on the fact that we are His children. Note that both the source and the end differ between these two kinds of hope. Amdir is a hope for earthly things, and it is based on your past earthly experience. Whereas Estel is directed towards our ultimate eternal happiness, and its source is our nature as beings created by God. So, for example, hoping that the Blackhawks will win the Stanley Cup, or that the next Star Wars movie will be good, is Amdir, not Estel.

"Have Ye Then No Hope?"
Not understanding the difference between these two led me to a lot of confusion. When my wife and I got pregnant with our first child, I was full of hope. I looked forward to being a father, to raising and loving my new son or daughter. This hope was Amdir. In fact, I probably didn't even think about it as hope. It was a sure thing. Parents get pregnant, and then 9 months later, they have their baby. That's just the way things were, right? Not always. We learned that lesson when we found out our second child, Lucy, had died during the first trimester.

So when we were pregnant with our third child, Elliot, I prayed like crazy. "Please God, let this child live." There were several warning signs throughout the pregnancy. The hormone levels were off. The baby's growth was always falling a little further behind. There was a clot in my wife's uterus.

But there were good signs as well. One ultrasound, taken when our doctor was sure we were headed for another miscarriage, instead showed a healthy baby with a strong heartbeat. We made it to the second trimester, which significantly increased the baby's chances of surviving to term. These signs gave me a foundation for hope.

So when Elliot died, I was furious with God. How could he do this to us again? Why would he give us cause for hope, only to dash that hope to the ground? A wise priest told me not to ignore that anger - not to pretend it didn't exist - but to keep praying. Keep talking to God, even if I didn't have anything particularly nice to say. So I worked through my anger. But a nagging question remained, all the way through our pregnancy with Charles: "How am I supposed to trust God?"

I was unable to answer this question until I could make the distinction between Amdir and Estel. While my foundation for Amdir has been shaken - I can no longer assume that my babies will be born alive - I can still have Estel, trust in God. The happiness God has in store for me is not on this earth, but beyond it. That doesn't make it any easier to deal with the pain of losing a child, and I know this message won't do anything to ease the pain of my readers. But it does give me something to set my sights on.

Church Teaching on Unbaptized  Children
There was a separate - but related - question I contended with in the wake of Lucy's and Elliot's deaths: Where were their souls? In my heart, I knew that they were in heaven. But it was irritating that the Catholic Church didn't seem to have much to say on the subject. I seemed to remember the Catechism said something like, "We can only hope that God will have mercy on those children."

"We can only hope? Really?" I thought. That seems pretty weak, especially if you're talking Amdir. Fortunately, that's not what the Catechism says. Here's the actual quote:


1261. As regards children who have died without Baptism, the Church can only entrust them to the mercy of God, as she does in her funeral rites for them. Indeed, the great mercy of God who desires that all men should be saved, and Jesus' tenderness toward children which caused him to say: "Let the children come to me, do not hinder them," allow us to hope that there is a way of salvation for children who have died without Baptism. All the more urgent is the Church's call not to prevent little children coming to Christ through the gift of holy Baptism.

That last sentence is easy enough. Since it is impossible to baptize a child before he or she is born, there is absolutely nothing more I could have done to baptize Lucy and Elliot. And in terms of hoping for their salvation, note the phrases "entrust them to the mercy of God," and "the great mercy of God who desires that all men should be saved." Looking back to the passage from The Athrabeth, it's clear that we're talking about Estel. The hope that the Church encourages me to have for my children's salvation is the same hope I have for my own salvation.

Now, some might say I'm totally off base here. That my babies - and all babies who die before baptism - are actually in a place called "limbo." That was an old theological opinion, and was never official Church teaching. In fact, the Church has officially moved away from that position, in a 2007 document that can be read on the Vatican's website.

That document further underscores the conclusions I've drawn from the Catechism. It states that there are "serious theological and liturgical grounds for hope that unbaptized infants will be saved and enjoy the beatific vision."

And that is the hope - the Estel - that I will carry in my heart every day until I can enjoy that beatific vision, reunited with Lucy and Elliot.

If you're interested in reading The Athrabeth in its entirety, as well as other writings of Tolkien about the history of Middle-Earth, I recommend picking up Morgoth's Ring. It's part of a series of books collectively called "The History of Middle-Earth," which are full of stories that didn't make it into The Silmarillion and The Lord of the Rings, as well as early drafts and alternate versions of the ones that did. You know how in the special features of movie home releases, you can watch deleted scenes with a commentary track from the director? "The History of Middle-Earth" is like that, but in book form. You can buy Morgoth's Ring on Amazon.com, here.

You can find other posts about miscarriage by clicking on Miscarriage Posts up in the navigation bar, and find resources for parents who have suffered loss on the Miscarriage Resources page.

If you would like to send a few pennies my way (which I use to pay for hosting the site), you can use my Amazon links to purchase any of the items I have recommended, or anything at all from Amazon. Alternatively, you can click the Amazon link here, and then proceed with your Amazon shopping.
athrabeth catechism catholic Charles Elliot finrod and andreth GCD Pick geek grief hope Lucy miscarriage morgoth's ring Tolkien