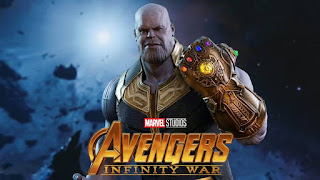 This post will contain full spoilers for Avengers: Infinity War. Go see it, then check back here. I have a crazy theory you'll want to read after you've seen it. (I'll post this again on my Facebook page in a few weeks, so you can always follow me there.) You have been warned...


Ten years ago, I went with some college friends to the AMC theater by Navy Pier to see Iron Man. I knew almost nothing about the character going into the film. I remember he had shown up once or twice on the Spider-Man cartoon that I used to watch on Saturday mornings when I was a kid. I'd also heard the Black Sabbath song, but that's not actually about the comic book character at all. The trailer made it look like a fun movie, so off we went. Little did I know, it would be the beginning of a film saga that would stretch across 10 years and 19 movies (so far), and bring to life dozens of characters I would come to love.

My Review
I can't even begin to write an in-depth review of this film. There's so much going on in the film, and - to be honest - it kind of blew my mind. The Russo brothers brought together a host of characters - many of whom were the main characters of their respective films - and managed to give screen time to all of them, while telling a story that spanned a galaxy, and while developing a compelling villain. And it was marvelous (if you'll pardon the pun). The action was amazing, and the multitude of character entrances were so rewarding. (I wasn't at a showing where people were cheering, but when Captain America made his entrance, I couldn't help but punch the air and let out a "YES!") And there was plenty of humor to go around. In short, for those who love the Marvel Cinematic Universe, Infinity War delivers just about everything we've come to expect.

Rather than go on and on about how great this movie was, I'd like to discuss a couple things that made this movie different.

Character Deaths
This film had more character deaths than the preceding 18 movies had combined. In fact, if you're looking at hero deaths (excluding mentors/father figures), then before Infinity War you really only have Bucky in Captain America: The First Avenger (but we found out in a subsequent film that didn't actually die), Loki in Thor: The Dark World (but we found out he'd faked his death at the end of the movie), and the Warriors Three (Fandral, Hogun, and Volstagg) in Thor: Ragnarok. So that's only three actual deaths in 18 movies. Well, I guess there's Groot at the end of Guardians of the Galaxy. He technically comes back to life at the end, but the director has stated that the Baby Groot (Teenage Groot in this movie) is actually the son of the original Groot. But let's not split hairs. Or twigs. Or whatever...

And on the other side of the coin, the villain - Thanos - survived. That's actually pretty uncommon in an MCU film. It happened in The Incredible Hulk, Thor (although we didn't learn Loki had survived until later), Captain America (again, we didn't know for sure that Red Skull was alive until he showed up in Infinity War), Avengers, Captain America: Civil War, and Spider-Man Homecoming. That's six total, but only four movies that you walk out of your first viewing knowing the villain survived.

Of course, we haven't even discussed the elephant in the room.

The End?
Not only does Thanos live, but he succeeds in getting all of the Infinity Stones. At the end of the movie, he snaps his fingers, and wipes out half of all life in the universe - including most of our heroes. Let's take a tally of who fell victim to the snap heard round the geek world. Or "The Snapture," as my brother called it.

And then it was over.

For me, the shock wasn't so much the fact that it happened; it was the fact that the movie ended right afterwards. I'd read the Infinity Gauntlet comics arc, so I had experienced large numbers of Marvel heroes winking out of existence. In the comics, they come back. A character named Adam Warlock (whose only appearance in the films so far has been in a sarcophagus in the Guardians of the Galaxy Vol. 2 end credits) is able to take the Gauntlet from Thanos and undo the damage.

So even though I didn't expect so many heroes to vanish, I was prepared for it. And I didn't think all of those characters would be gone for good. Of course, anyone who follows Marvel movie news knows that they've announced a sequel to Spider-Man Homecoming, and the box office success of Black Panther would seem to indicate that there's a sequel in its future. I resist using information like that, though, because A) citing behind-the-scenes knowledge isn't as interesting as just analyzing the story itself, and B) announced sequels aren't guarantees; in fact, those announcements could just be smoke and mirrors.

So looking at what we know from the story, what happens next?

My Crazy Theory
It's been pointed out that, after all the dust clears (last pun, I swear!) the heroes that remain are the original Avengers line-up: Iron Man, Captain America, Hulk/Banner, Thor, Black Widow, and (presumably) Hawkeye. Here's what I think will happen.

First of all, Tony is the only Avenger not on Earth, so he'll need a ride home. In the end credits, we see Nick Fury trying to contact someone before he disintegrates. The last thing we see on his retro-looking communications device is the symbol for Captain Marvel. Ignoring the fact that we know there's a Captain Marvel movie coming out next spring, which will set up their backstory, we can just assume that Fury is contacting someone equipped to deal with the type of cosmic catastrophe they're experiencing.

I think Captain Marvel will reunite our Avengers, and get them to wherever Thanos is. Then, together they can overpower Thanos (thanks in large part to Captain Marvel's cosmic powers) and take the Infinity Gauntlet from him. Based on what happens in Infinity War, it looks like the Gauntlet is broken. They won't be able to put it on and snap their fingers to put everything back the way it was. But we know the stones still work, because Thanos uses the Space Stone to teleport off of Earth.

So here's my off-the-wall idea. There are six stones, right? And how many original Avengers are there? Six. I think each of them will wield one of them:

The Mind Stone - Tony is the brains of the team, so it makes sense that he would get this one.
The Time Stone - Who better than Steve Rogers, "The Man Out of Time."
The Space Stone - The ability to teleport from world to world would be right up Thor's alley, since he has a lot of experience in this area.
The Power Stone - "Hulk is strongest one there is."
The Reality Stone - Natasha is a master of disguise, and takes on different identities. "Who do you want me to be?"
The Soul Stone - This one's a bit of a stretch, but Clint is kind of the soul of the team, especially in Age of Ultron. He's the only one with his own family. His desire to leave the fight and live a quiet life with his family is reminiscent of Adam Warlock in the comics. After Adam defeats Thanos the first time, he retreats to a peaceful life inside the Soul Gem.

They each take one of the stones, and are able to use their combined powers to reverse "the snap." So everyone that disintegrated will come back. I don't know if the characters who suffered "ordinary deaths" will come back or not. I'm leaning towards not.

And here's the kicker. Ordinary mortals aren't supposed to be able to wield Infinity Stones. So the Avengers do this knowing it will kill them. They sacrifice themselves to bring back the trillions of lives Thanos had wiped out. What better way to go out than that?

Thor could potentially survive. And maybe Hulk. But I think it would be more powerful if they all went out together.

Well, what do you think - insane, or totally insane? Let me know in the comments.

So if you would like to send a few pennies my way (which I use to pay for hosting the site), you can use my Amazon links to purchase any of the items I have recommended, or anything at all from Amazon. Alternatively, you can click the Amazon link here, and then proceed with your Amazon shopping.
comics geek marvel movies reviews