This is the Way: What We Know About Mandalorians - Part II 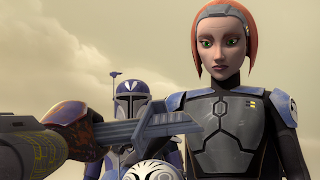 In my previous post, I explored what we had learned about Mandalorians in the animated series Star Wars: The Clone Wars, as well as the tie-in graphic novel Son of Dathomir. You can see my list of observations here.

To review, here are the revelations I pointed out from the Disney+ series The Mandalorian:
In this article, I will look at the Mandalorians in  Star Wars: Rebels:


Season 3, Episodes 15-16 (Trials of the Darksaber, Legacy of Mandalore)


Season 4, Episodes 1-2 (Heroes of Mandalore: Parts 1-2)
So based on all of that, here are my conclusions and theories:

Conclusion
If you like my blog, and you'd like to receive emails each time I upload a new post, you can enter your email address below. Or, you can "Like" or "Follow" GCD's Facebook page here. You can also find me on Instagram and RCsocial.net, a Catholic-friendly social network on Mastodon. If you want to express an opinion, ask a question, or give feedback about this post or others, feel free to leave a comment below, or email me at geekycatholicdad@gmail.com.

So if you would like to send a few pennies my way (which I use to pay for hosting the site), you can use my Amazon links to purchase any of the items I have recommended, or anything at all from Amazon. Alternatively, you can click the Amazon link here, and then proceed with your Amazon shopping.
clone wars geek mandalorian Star Wars this is the way series TV shows